Stylish, and powerful women in pop culture are endorsing a celebration of pregnancy, and honestly these fashion choices are less about fashion and more about autonomy.

Let’s begin by stating the obvious – we’re living in an era of revolutionary pregnancy fashion, and rightly so. From Rihanna’s bump-forward and subverting maternity clothes to Sonam Kapoor’s chic and trendsetting pregnancy style, celebrity mommies are flaunting their baby bumps remarkably.

That said, for the longest time pregnancy was seen as something that should be kept under the wraps, quite literally. Traditional maternity clothing reflected that, and was discreet, loose, and seemingly undesirable, however, that is not the norm anymore.

Stylish, and powerful women in pop culture are endorsing a celebration of pregnancy, and of one’s body that goes through tumultuous changes in the nine months of childbearing.

Rihanna’s much-celebrated pregnancy tour, which displayed belly-flaunting looks from Valentino, Christian Dior, and Gucci, led to a Vogue cover, a commemorating statue showcasing the baby bump at the Metropolitan Museum during the Met Gala, and a New York Times piece plunging into the discourse of The Politics Of Rihanna’s Pregnancy Style. The pregnancy tour spiralled into a phenomenon, given that there’s never been so much conversation, and even more importantly so much excitement around motherhood before. 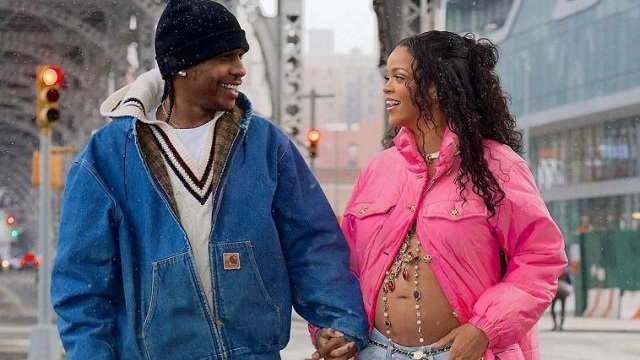 Of course, Rihanna was neither the first nor the last popular culture icon to grab eyeballs with her baby bump. Perhaps, one of the earliest of such moments would have to be Demi Moore’s 1991 Vanity Fair cover, in which she flaunted her bundle of joy by wearing, well…nothing. It impacted the glamour world in lasting ways and paved the way for other pregnant women to see the oozing sexuality in maternity, a concept that couldn’t have been more distant then.

There’s also Kareena Kapoor Khan, who can be credited with changing the maternity fashion game back home. While she may not have gone bump-forward, with seductive garments, there was definitely a flair and confidence that inspired several women to own their bodies even when they seem unappealing to conventional beauty standards. From comfy dresses, to slit gowns, to ornamented ethnic wear, Kapoor graced the ramps, the carpets, and in my personal favourite, the gossip reality show, Koffee With Karan, where she was evidently having a lot of fun – which is a statement of its own.

On the heels of Rihanna’s pregnancy, there’s Adriana Lima, a Brazilian model and actress, who was on the Cannes red carpet recently, dawning Chopard jewels, Cavalli gowns, and her glorious baby bump. Her belly-baring looks on one of the most glamorous carpets are taking the world by storm. Back in the subcontinent, our own style icon, Sonam Kapoor, is creating her own set of looks that flaunt her baby bump. One of her looks included a drape from Abujani Sandeep Khosla, and some heavy ornaments, giving an old-world touch that showed off her bundle of joy artfully. All that said, it is true that Rihanna’s transgressive and raunchy looks are surely a harbinger when it comes to showing how seductive maternity can be. However, for every Rihanna and Sonam, there’s also  Anushka Sharma and Kareena Kapoor who didn’t opt for risque outfits like the former, and instead went for something rather sober and snug. Nevertheless, even they shined bright with raw power and fortitude, as they embraced their body and carried with immense poise.

The point I am trying to make is that there’s a certain flamboyance and pride that is slowly being attached to motherhood and womanhood, in these fashion choices. Whether it’s Rihanna’s low-rise jeans, cocktail dresses, and crop tops, or Sonam’s Leotards, Blazers, and Kaftans. Whether it’s Anushka’s stretchy pants and tent dresses, or Kareena’s elegant kurtis, and form-fitting gowns – the gist is that these fashion choices are less about fashion, and more about autonomy. Anushka Sharma is with her husband and Indian cricketer Virat Kohli

Women for the longest time have been asked to give up their sense of style when they are pregnant and showing a bump. There has been a dull desire to make the most out of whatever limited options are available. For many, the change of style is also an act done in favour of comfort which is alright, but if we are being honest, then many times it’s simply because tight-fitted clothes and exposing garments would show round, big, bellies  – a sight that is not welcomed. However, by taking charge of one’s fashion, whether in favour of style or comfort, or both, these women are sending the message loud and clear – pregnancy is beautiful, and the changes that one’s body goes through is meant to be embraced and celebrated, not hidden. A pregnant body isn’t supposed to be seen as something obstructive, and unattractive, it can be sexy, seductive, and as beautiful as otherwise. Pregnancy is seen as a transition from attractive womanhood to sedate motherhood, after which a woman is no longer seen as desirable, but with conscious style choices, and flamboyant appearances, women in popular culture redefining these daft stereotypes, and paving the way for women around the world to champion their maternity, their body and themselves.

Takshi Mehta is a freelance journalist and writer. She firmly believes that we are what we stand up for, and thus you’ll always find her wielding a pen.