There wasn’t one specific objective when I launched The Athletic’s NHL style power rankings at the start of the 2021-22 season. I wanted to give certain players props for breaking the mold and daring to show personality in a league that often discourages straying from the norm. I wanted to highlight some awesome projects in the hockey world, like Black Rosie coming to life. I wanted to shame social media managers for using the word “drip” incorrectly.

Somewhere along the way, sandwiched in between the inevitable “Who cares?” comments, we cultivated a community of fun people here, and I thank you for the interactions I’ve looked forward to throughout the season.

Also along the way, I’ve started to realize how deep fashion runs for some NHL players. Pierre-Edouard Bellemare, for example, told us about drawing inspiration from his sisters and the late Ray Emery.

A byproduct of all of this — of a full season’s rankings — has been a lot of data points about the best-dressed players in the league. There’s human error to account for, and there are inherent biases considering teams like the Maple Leafs barely show us their player arrivals and no team show every player (and we can’t expect them to). But it’s still fun to see the drip per 60 laid out after a significant period of time.

We brought in the big guns for this — The Athletic’s analytics and data visualization extraordinaire Shayna Goldman — to help us get a true picture of the NHL’s style landscape of 2021-22. 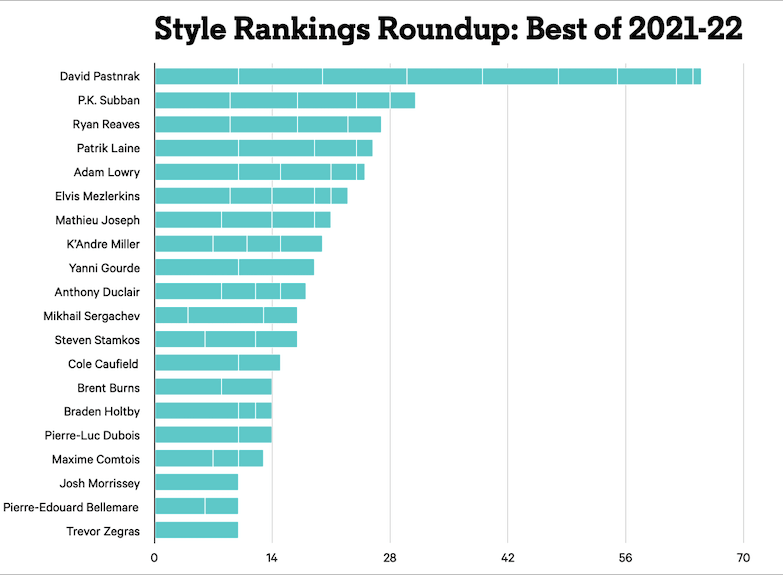 Explains Shayna: “Sara compiled every player to ever make the rankings, and we created a point system based on where they landed each week. Ten points were awarded to the No. 1-styled player and one to the 10th for every edition of the style power rankings. Style points were added together for a final score, as the chart reflects. Some players bolstered their final tallies with quite a few mid-range rankings, while others just had bangers week after week (we’re looking at you, David Pastrnak) to boost their numbers. 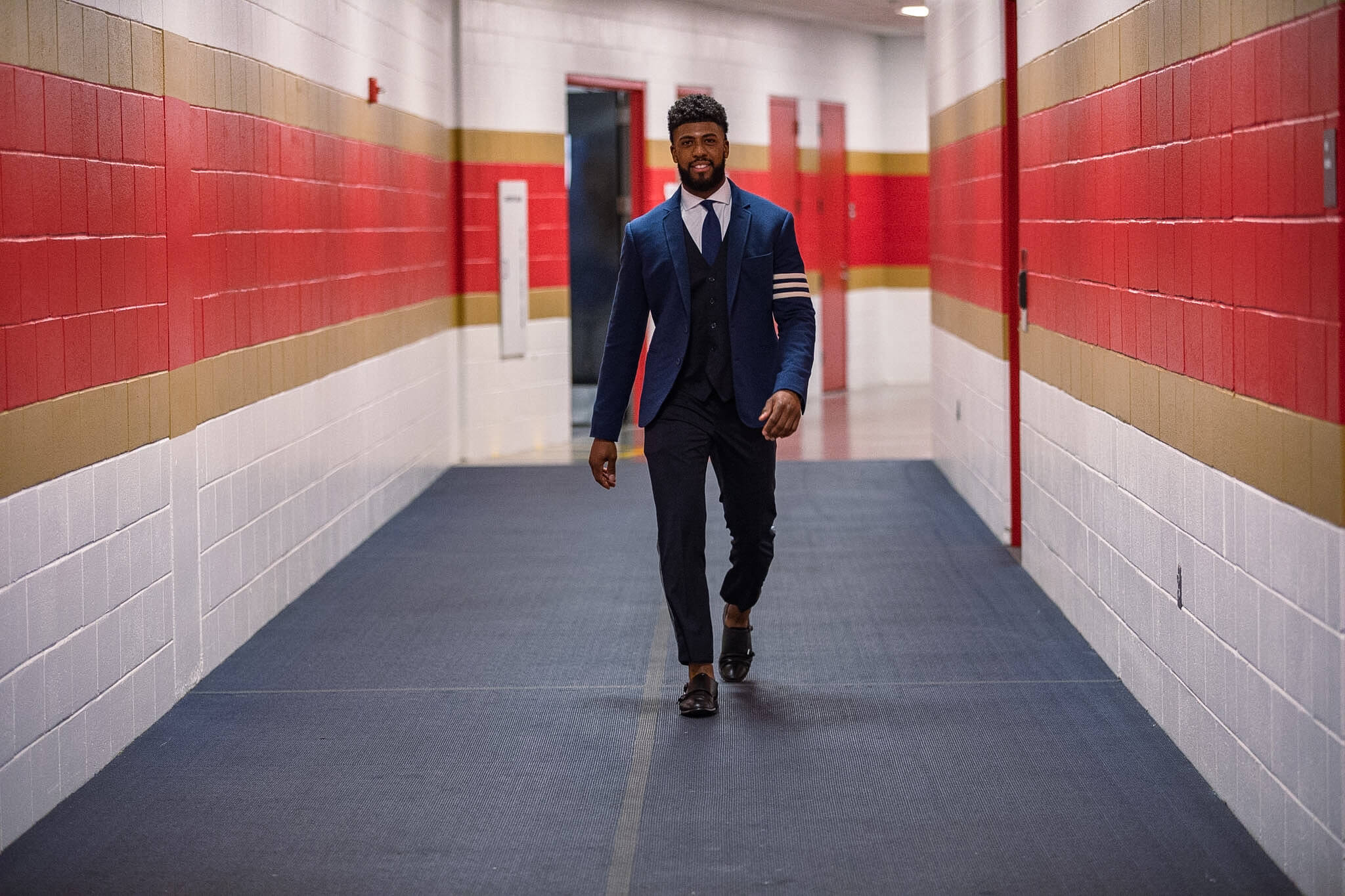 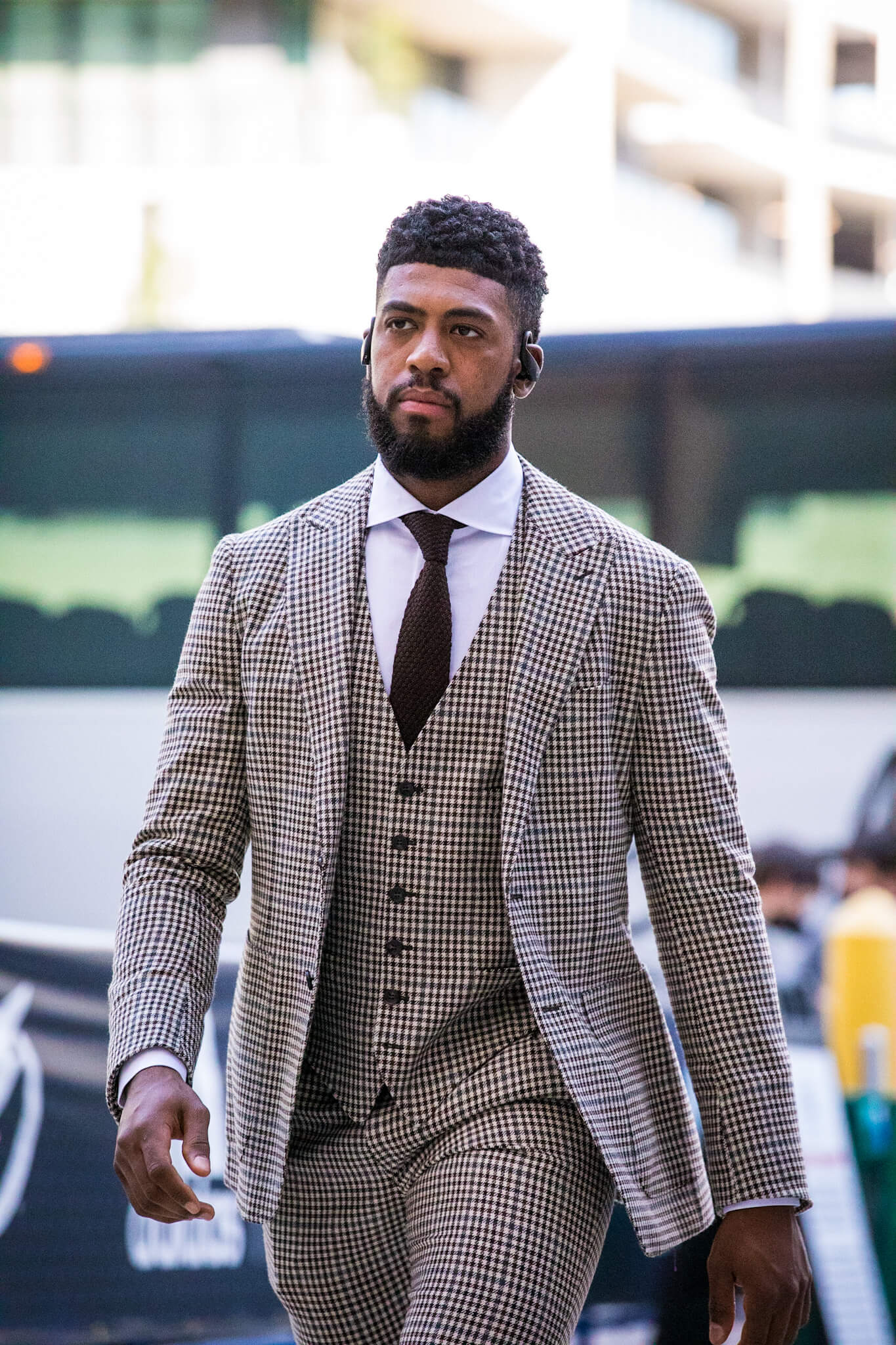 Photos courtesy of the @flapanthers.

Duclair put the Panthers on the style radar with a few expressive looks throughout the season. He had four appearances overall and peaked at No. 3. I have a feeling when he returns from Achilles surgery recovery midseason, he’ll come bearing some No. 1-worthy fits.

yanni is both #teamblue & #teamgreen 😂 pic.twitter.com/1AOtDLmZz6

Gourde kept a nautical theme going throughout the Kraken’s inaugural season, and I just love that for him and them. He was one of the higher-profile Kraken players in their first year as a team, and he clearly understood part of the assignment was to dress the part. We’ll appreciate all of his on-theme looks when we reminisce on Seattle’s first season 10 years from now.

He only made two appearances in the style power rankings, but they were at No. 1 and No. 2.

Miller was absolutely the style breakout star of the year in his first full non-COVID-19-restricted NHL season. I was expecting him to end up a bit higher on this end-of-season roundup, but the Rangers started pushing pictures of everyone in tracksuits toward the end of the year. I’m sure he’s just getting started, and I’m looking forward to many more years of fashion excellence — especially in New York City.

He appeared four times on the rankings, peaking at No. 4 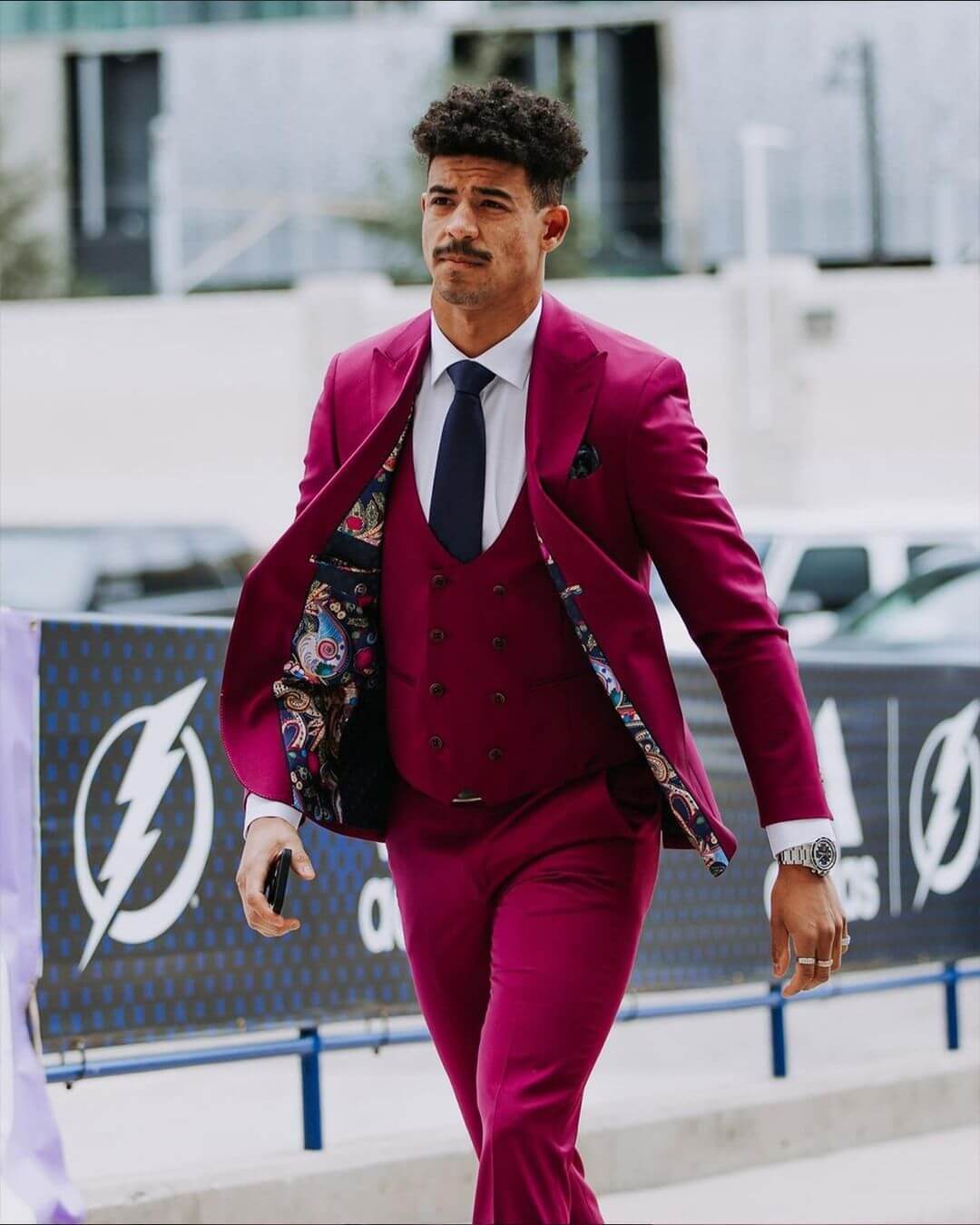 Mathieu Joseph (courtesy of the @tblightning)

Joseph was a mainstay in the middle of the pack all season, and some would argue that’s preferable to a No. 1 appearance and then a dropoff. I’d consider Joseph the NHL’s master of the cool, modern but never over-the-top look. He keeps his suits classic but interesting with a few personal twists, and that’s super reminiscent of his suburban Montreal roots.

Joseph appeared on the rankings four times, peaking at No. 3.

Elvis Merzlikins has entered the building. He says Matiss Kivlenieks, who once had The Joker on his #CBJ helmet, would be jealous of the suit. pic.twitter.com/A3clwq2O4j

Elvis’ style and personality live up to his iconic name, and even when the Blue Jackets weren’t exactly buzzing, his outfits were something to look forward to throughout the season. A proponent of suspenders, hats and joker suits, Merzlikins peaked at No. 2 and made five total appearances in the 2021-22 style power rankings. I’d love to see what’s up his sleeve for when his team has a good season. 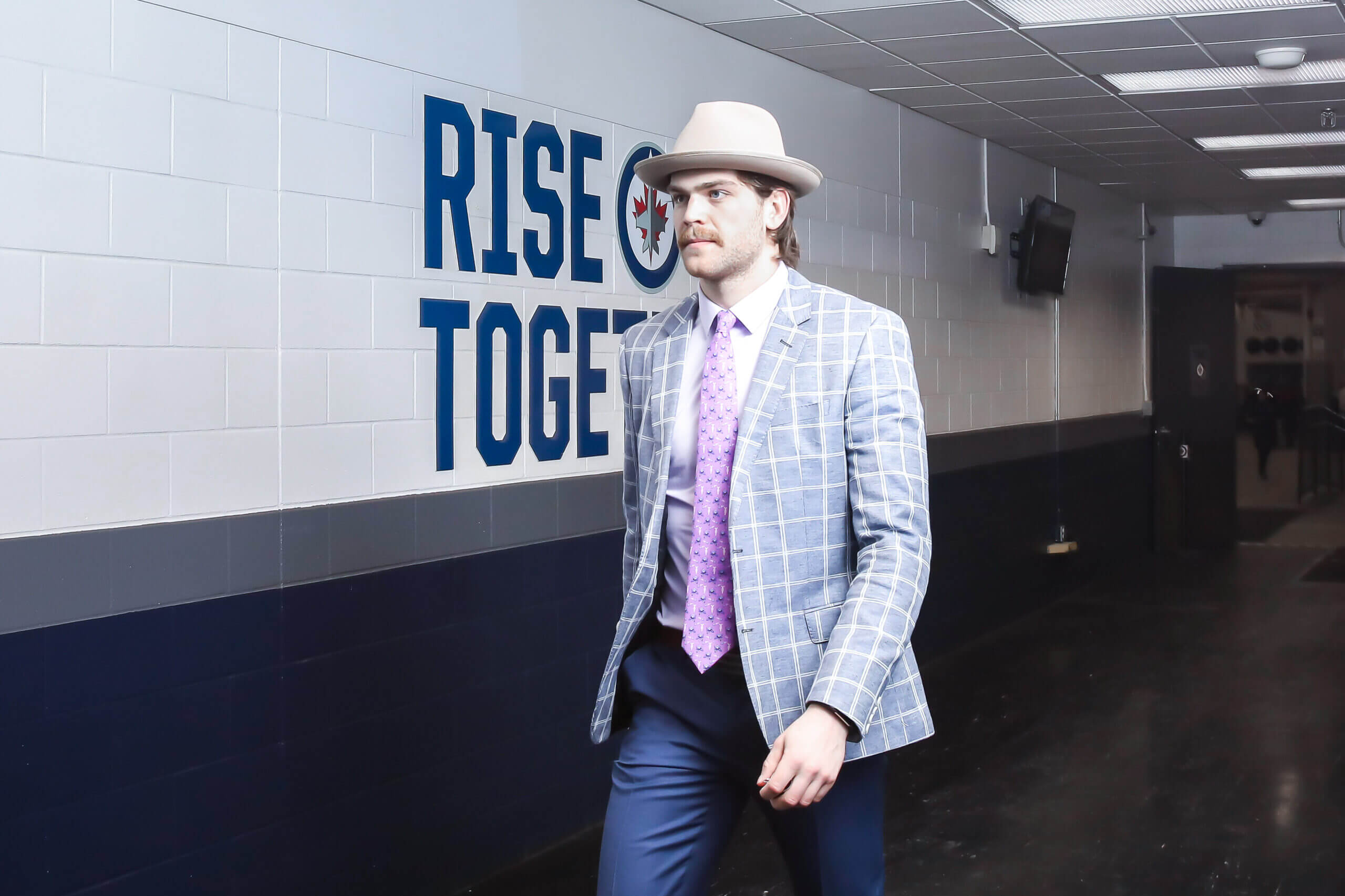 When I first set out to do these rankings, I didn’t think Lowry would make so many appearances. But despite the Winnipeg cold, he brought the heat week after week. He has a personal style vaguely reminiscent of a cool college professor, and he’s remained very committed to the overall bit. He toed the line of sticking to his look and keeping it fresh seamlessly, and I can’t wait to see what’s on deck for next season.

Lowry was all over the place in the rankings, with five total appearances, ranging from No. 1 to No. 10.

Laine started off the 2021-22 season strong with his fits and showed us all the power of color coordination and accessories. His style is probably the most polarizing in the league because it’s bold and centered around statement pieces like sunglasses, 007 suits and beanies that match his cars.

Love him or hate him, his willingness to push the envelope will no doubt pave the way for up-and-coming NHLers to dress however they really want to dress.

Laine’s debut at No. 1 and three other appearances in the rankings were enough for the No. 4 spot overall, even though he didn’t nail it every time and had some misses. Goes to show the power of a few bangers and that sometimes taking chances is worth it, even if they don’t land.

If Laine was the king of risk-taking and flash, Reaves was the king of consistency when it came to his outfits. He isn’t very flashy, and he doesn’t need to be; he lets strong solid color selection do the talking. His specialty seems to be working with bold colors, and you saw it with tons of purple and green solids this season. We should also give props to his tailor, who clearly knows how to fit a suit. 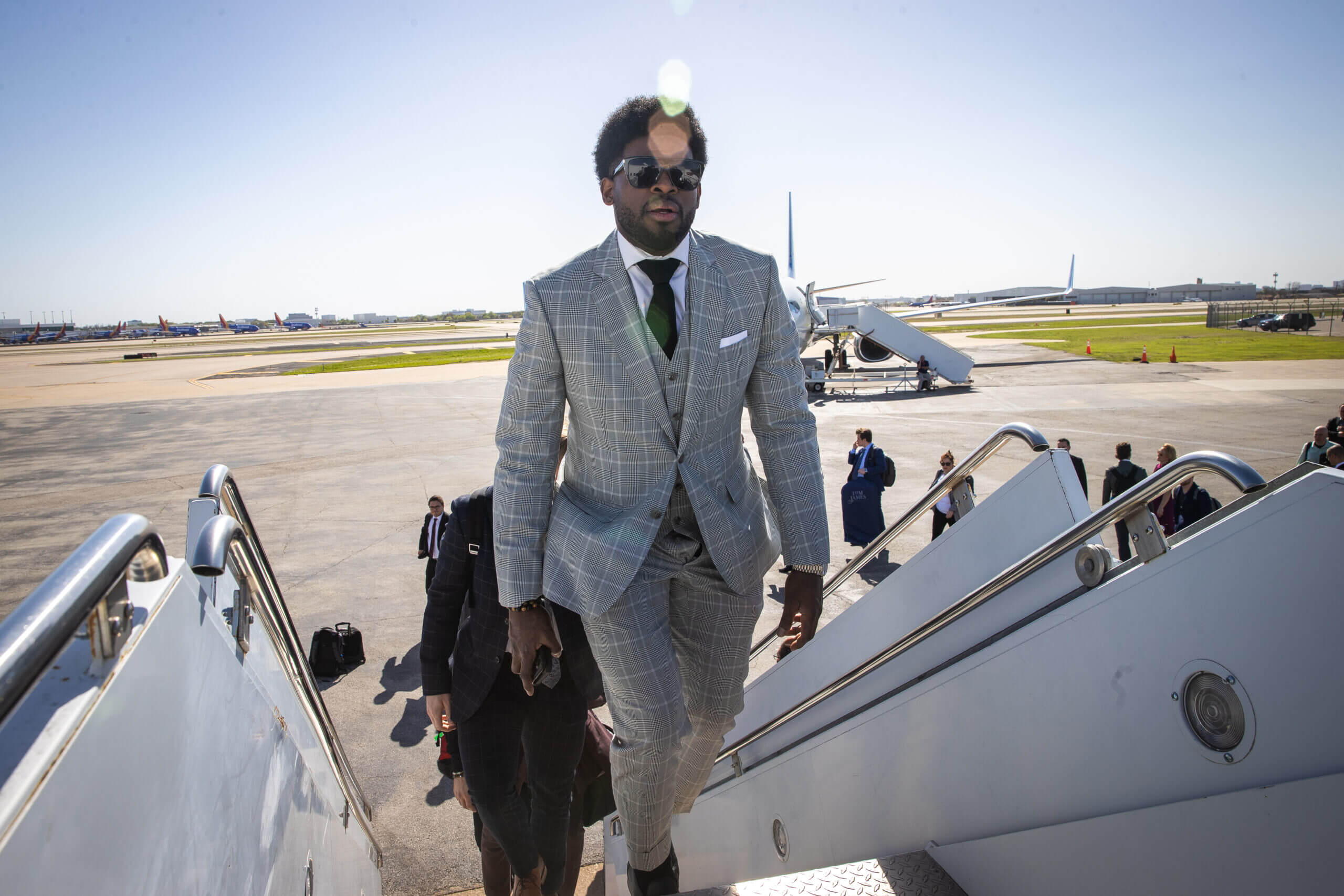 P.K. Subban (courtesy of the @njdevils)

Subban has been a rare burst of personality in the NHL since his arrival, and part of that has always been his strong sense of style. Coming as a shock to absolutely no one, he’s among the biggest risk takers in the world of hockey fashion. (Here are two more recent looks posted by Subban himself.) He never topped the charts last season, but I think the Devils’ jersey rebrand explains that, with the social feeds focused on the kit and not the fits. I can only work with what the teams and players show me, folks.

Subban ended up with three top-five appearances, five total appearances and one shout-out from the Missin Curfew fellas. Not bad at all.

Congrats on the first one shappy! Jersey shore stand up🔥 pic.twitter.com/54XHd6c1Jd

Pastrnak ran away with the 2021-22 style power rankings crown. Not only did he have the most No. 1 rankings with three, but he also had the most overall appearances with nine. He’s never afraid to take a risk, but even his more understated looks have a certain Pastrnak flair to them. His range is simply unmatched among his peers, and he pulls it all off with a confident smile.

Some Pasta and tendies. 🍝 🎩 pic.twitter.com/3viDjl0n6R

He also used his fashionable eye for good in the hockey world, presenting Bruins legend Willie O’Ree with a custom fedora, and that’s exactly what we love to see.

It’ll be a tall task for Pastrnak to follow up all of these killer looks next season — more hockey players are getting creative with their outfits every year — but if anyone is up for a two-peat, it’s him.

6 Chemical And Minerals Bad For Your Health

Is Garnier Whole Blends Good for Your Hair?