The Princess of Wales wore vintage Chanel for today’s engagement with the Prince of Wales. The pair celebrated Coach Core’s tenth anniversary with a visit to Copper Box Arena at Queen Elizabeth II Olympic Park. In the photo above and below, they are welcomed by Sir Ken Olisa, OBE, Lord Lieutenant of London. Coach Core was launched in July 2012, created in response to the London riots and to build on the 2012 London Olympic and Paralympic Games ideals. Below, the Duke and Duchess at the 2012 Coach Core launch. In 2012, Prince William said, “We are looking to develop these young people, not just as high-quality sports coaches but also through the mentoring and peer work, as confident and engaging members of society.”

More from the Coach Core site: In November 2017, the Duke and Duchess of Cambridge spent time with Coach Core apprentices working with schoolchildren in Birmingham. In October 2018, the Duke and Duchess visited a Coach Core event in Essex. Celebrating its 10th anniversary, Coach Core work across 17 different sites in the U.K. and have helped over 750 disadvantaged young people start meaningful careers with sports coaching apprenticeships. The charity — which is also supported by ambassadors from the sports world including England Lioness and Manchester City captain Steph Houghton, six-time Olympic medallist Max Whitlock, tennis legend Judy Murray and elite gymnastics coach Scott Hann — also have a five-year agreement in place with Sport England to become a systemic partner of change.

Below, the royals with Eboni Usoro-Brown (née Beckford-Chambers), a Coach Core trustee and legal advisor. Ms. Usoro-Brown is also a former championship netball player for England and the Queensland Firebirds. From The Daily Mail’s coverage:

The couple, both 40, had the chance to meet some of the young people with whom the charity works with and got a taster of the sports sessions on offer – and a beaming William tried his hand at boxing when at the event.

More from Victoria Ward’s story in The Telegraph.

The Princess joined apprentices in a game of boccia, an Italian form of wheelchair bowls, while the Prince also had a go at taking penalties at a small inflatable goal. While Prince William was boxing – Kate tried her hand at boccia in Stratford. @KensingtonRoyal pic.twitter.com/awOiWLwr2T

The Duchess speaking with coaches and apprentices. Prince William did a little boxing. We return to The Telegraph’s piece.

Prince William donned boxing gloves to spar with apprentice coaches at the Olympic Park in Stratford, east London, impressing them with his ability to dodge a punch.

Gabrielle Reid, 18, from Bournemouth, said: “I taught him some basics – one-two, jab. He wasn’t bad. He picked it up quickly. Some defences as well – some slips, some rolls.”

The Prince admitted he had done some boxing before, telling her: “I could never get the hang of how to slip.”

Prince William boxing and other delights from this afternoon’s visit to Coach Core by the heir to the throne and the Princess of Wales. pic.twitter.com/C5ripFoRN0

This next photo shows the Princess with Coach Core’s CEO, Gary Laybourne. The Princess with coaches and Coach Core CEO Gary Laybourne (2nd from left). The princess spoke to Scott Cooper, 26, from Grays, Essex, who completed his Coach Core programme and is now a youth worker with Barking and Dagenham council.

Cooper, who has cerebral palsy and uses a wheelchair, said: “I was telling her I wanted to inspire people with disabilities and she said that I would be an inspiration because of the way I showed grit and determination.”

There were presentations and remarks at today’s event. Below, the Prince, Princess, and (I think) Sir Keith Mills. Sir Keith was deputy chairman of the London Organizing Committee of the Olympic and Paralympic Games. He is also co-founder of the 1851 Trust with Sir Ben Ainslie. In his remarks, Prince William said:

Sport has an incredible way of providing hope, connection and opportunity and when Coach Core was established ahead of the Olympic and Paralympic Games in 2012, it was designed to use that power to help change young people’s lives. In her Town and Country story, Victoria Murphy reports, “Town & Country understands that today is their final public appearance as part of a series of engagements designed to showcase the areas of work that they have made, and will continue to make, their focus. Both William and Kate have long-championed the benefits of sports and physical activity.”

Kensington Palace posted about the organization on social media after today’s engagement. Now for our look at what Kate wore for today’s engagement. We begin with her Chanel Pre-Owned Blazer ($4698), a double-breasted style in deep blue, a terrific ID by Carly of Kate Middleton Style. The piece is crafted in an acrylic/nylon/cotton/wool blend. It features notched lapels, patch pockets, turned-back cuffs, and contrasting trim; it is also described as being circa 1995. The piece is part of the Pre-Owned Collection at Farfetch, luxury items offered for resale online. Farfetch is one of many luxury retailers selling previously owned merchandise. More from this Fashion United piece about conscious luxury trends.

The demand for pre-owned luxury is also growing and attracting high-value customers, with 20 percent of survey respondents purchasing a pre-owned fashion item in the past year. While views of pre-owned items were up 150 percent year-on-year, and 65 percent of pre-owned GMV comes from Farfetch’s highest-spending private client and platinum customers.

It looked like the Princess repeated her Roland Mouret Axon trousers (sold out). She wore her Gianvito Rossi Piper Pumps ($695), a block-heel style with a pointed toe and 3.5″ heel.

The Princess’s hair was down today. The royals met with guests on a special episode of BBC Radio 1’s Newsbeat for World Mental Health Day. The group discussed their experiences and the importance of speaking out about struggles.

The royals met Dr. Abigail Miranda, an Educational and Child Psychologist working in the early years; António Ferreria, a mental health activist who was diagnosed with Undifferentiated Schizophrenia and Emotionally Unstable Personality Disorder as a teenager; Ben Cowley, a registered Music Therapist and Assistant Mental Health Advisor for the Royal Welsh College of Music and Drama; and Emma Hardwell, a Youth Participation Officer at The Mix which offers mental health support to those under the age of 25, as well as Newsbeat presenter Pria Rai (on far right). From this People story.

“A lot of people don’t realize what they need until it actually comes along,” the Prince of Wales said. “You can be living one life one minute and something massively changes, and you realize you don’t necessarily have the tools or experience to be able to tackle that.”

“If we can’t look after ourselves we’re not going to be able to tackle the issues we feel we have to on a day-to-day basis,” he continued.

Toward the end, Prince William joked, “I’m conscious we’ve run out of time — and [host] Pria [Rai] might say this is the worst Newsbeat production by two interviewers she’s ever seen.”

“You know what? You can come back,” Rai replied. “This seat, I’ve kept it warm. I think you’ve done a very good job!” More from that People article.

At one point, Kate asked, “I’d love to know, and maybe the listeners also will be interested as well, how do you as individuals look after your mental health?”

In reply, a guest told her that the most important thing for them was being “aware” of their mental wellness.

“Not every day is going to be roses and sunflowers. I know some days I’m going to have to push against the clouds to see that sun again,” the man said. “You can’t always run away from it, sometimes you have to really face and conquer them. With practice, there’s progress.”

Below, a clip from the program.

You can listen to the entire program via this link.

The Princess of Wales wore a new necklace by New York jeweler Laura Lombardi. The ‘Luisa’ Necklace ($260) is made in 14K gold-plated brass, suspended from a handmade oval link necklace that is 16″ in length. More from this Vogue story.

The statement necklace was something of a curveball compared to the more delicate jewelry she’s worn in the past. From Kiki McDonough citrine earrings to sweet pendants from Astley Clarke or diamond-encrusted pieces by Mappin & Webb, the Princess typically favors subtle, dainty, and elegant accessories. Her chunky chain is more in line with the long-standing trend for piling on statement gold necklaces (see every understated editor at fashion week in their familiar uniform of crisp white tee, blazer, and chain).

It’s easy to see the appeal of Laura Lombardi’s gold chains. The New York-based designer specializes in contemporary pieces with a twist—the Princess’s necklace features a sculptural pendant in the shape of a heart.

A Tip of the Tiara to Carly at Kate Middleotn Style for this ID, this is not a designer I would ever have thought of checking for the necklace.

It looked like the Princess wore her Zara Inverted Lapel Blazer, first noted at a June 2022 Little Village engagement. Some believe the blazer is a darker color than that worn in June, posing the possibility the Princess owns it in two colors. It’s possible, but my guess is that the lighting outside in June and inside the BBC studios is responsible for the color difference.

The Royal Family Channel offers more than an hour’s coverage in this video.

If looking for a shorter report, this runs a bit more than 3 minutes.

This clip from The Independent runs just a bit more than one minute. 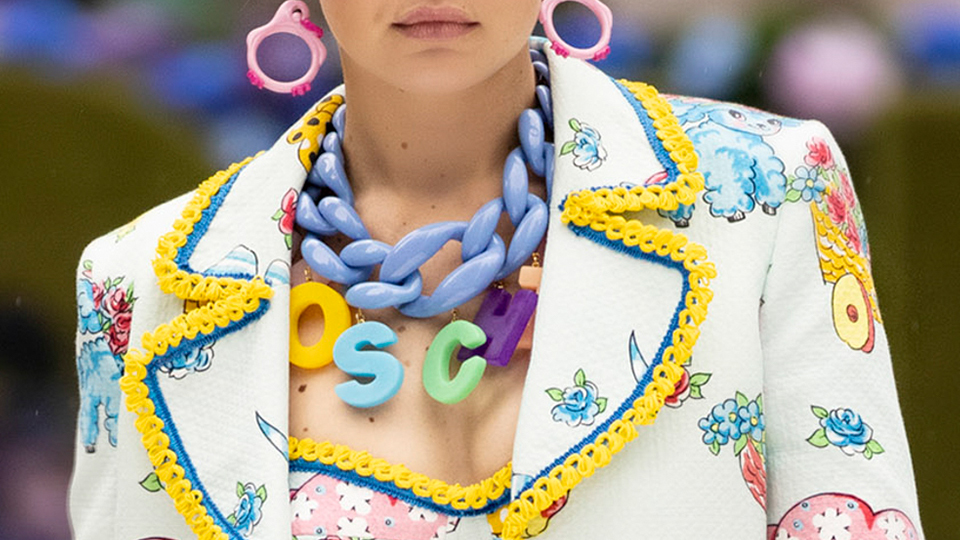