It was in 2016 when Ashish Chopra (27) started his quest to find men’s footwear with heels in his shoe size. After years, and on being disappointed about not finding a pair, Ashish—he is a drag artist who performs under the name, Cumsin Haseena—decided to rope in his family to launch a footwear brand. “It is difficult to find men’s heels in India. My mother had been working for a shoe brand at that time and I asked her to start her own shoe brand that would be inclusive,” he shares. This was how BeUnic, a label that caters to the sartorial needs of the LGBTQIA+ community, was born in 2019.

While the brand was launched with the idea to present designs created by Ashish’s mother, it has—over the years—grown to become more of a community-oriented e-commerce platform. Apart from featuring apparel, accessories, and home decor on their platform, the team also aims to inspire and influence other queer brands to showcase their talent in the evolving market space. “During our initial stage, we attended an LGBTQIA+ entrepreneur conference. It was there that we met a number of smaller queer brands that were selling their products on Instagram. BeUnic evolved with the thought of giving these people the recognition they deserve,” adds Ashish, who shuttles between Noida and Bengaluru. 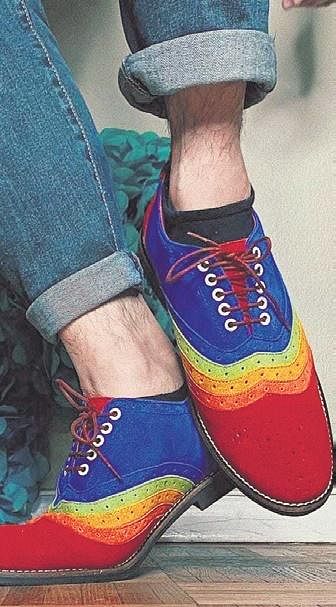 Stronger together
As a child, Ashish knew he “felt different from the other boys” in school. “I don’t have any fond memories from that time. I would be bullied and called names to the extent that I would avoid going to school. When you are a kid, these are the times when you start questioning yourself,” shares Ashish. It was his brother, Vishesh Chopra (29) who supported him during this time and made Ashish feel accepted. Vishesh, who is the co-founder of BeUnic, mentions how important it is to have an open mind when interacting with the queer community.

“Allies are extremely important. They help queer people feel accepted and [affirm] that there is nothing wrong with them just because of their sexuality,” shares Vishesh. Their brand, the brothers mention, is just another way of making people from the LGBTQIA+ community feel acknowledged. “The people from the community are creative and talented but they are scared to put themselves out in the world. We try to give them a small push in the right direction,” adds Ashish.

Against all odds
Although convincing his mother was difficult at first, Ashish now proudly states that his mother is an ally in both his growth and the growth of BeUnic. “When I first came out, my mother was horrified. She even consulted a psychiatrist to help convert me back to being straight,” says Ashish. However, it was a pride parade that his mother attended with Ashish that truly opened her eyes. Since then, they have been trying to mobilise society to become inclusive.

Since the decriminalisation of Section 377 in 2018, Ashish shares that the attitude towards the queer community is slowly changing. “Kids these days know a lot and it feels great that they are trying their best to create a wholesome community,” he concludes.

June is celebrated as Pride Month worldwide. Watch this space for stories from the LGBTQIA+ community

Embracing your true self
My whole idea behind starting drag was to tell the world that I can wear a ghagra or a sari without shame. Clothes do not have any gender. I think all these notions are man-made and I wanted to break that completely.

Selfcare Tips To Help Love The Body You’re In