A woman who overhauled her appearance with a 9st weight loss and cosmetic surgery to remove loose skin has revealed she continued to hate how she looked until she learned more about body acceptance.

Leah Jane, 39, from West Sussex, has racked up almost 36,000 followers on TikTok, where she posts videos about midsize fashion.

The marketing consultant, who was once a size 10 after shedding 9st from her size 24 frame has admitted that despite spending thousands on surgery to reduce loose skin and lift her breasts, she was still unhappy with her appearance.

She is now a size 14 to 16 and has learned to love herself by having therapy and following body confidence accounts on social media. 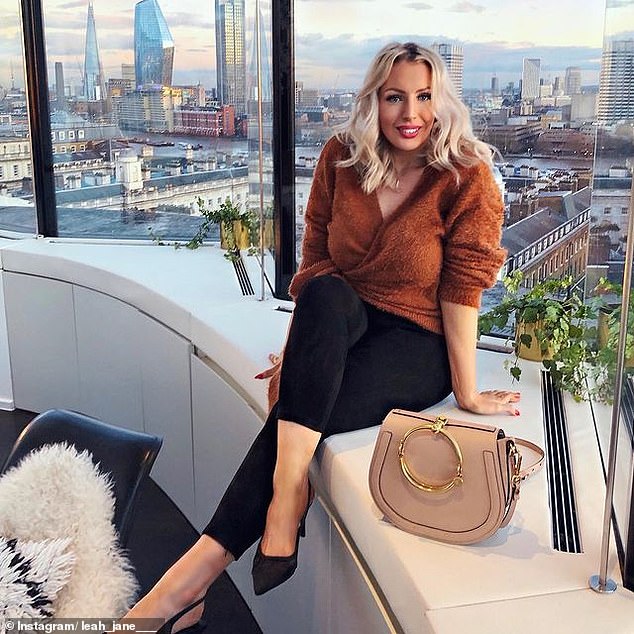 Leah Jane, 39, from West Sussex, has gone viral on TikTok after revealing her struggle with body acceptance after having cosmetic surgery. She’s now happy at a size 14 – 16 (pictured) 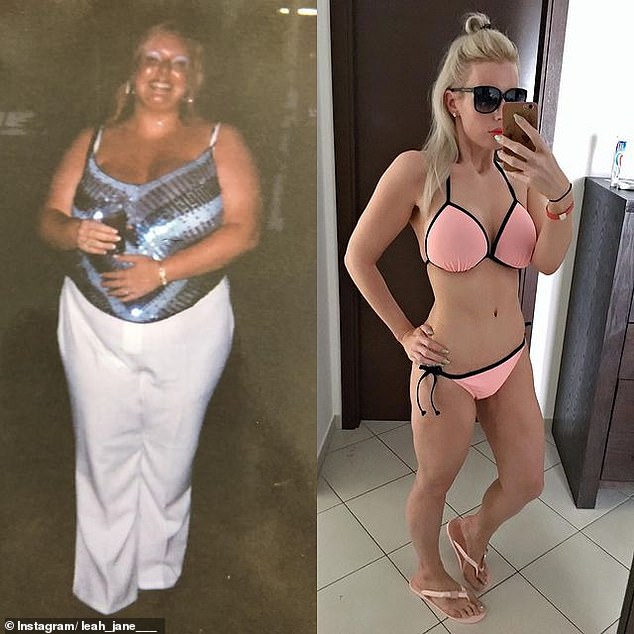 Leah had a tummy tuck, breast lift and skin-tightening procedures after shedding 9st. Pictured left: Leah at her heaviest, right: Leah as a size 10

At age 23, Leah had a tummy tuck to get rid of the ‘saggy skin’ she was left with after shedding 9st five years earlier.

She followed up the cosmetic surgery two years later with a breast lift and at age 31 had a skin-tightening procedure on her thighs.

Leah explained that the joy she had after spending thousands of pounds on altering her appearance didn’t last.

Speaking to The Sun, Leah claimed to understand the messages people send her about hating their body after having cosmetic surgery, saying: ‘Not enough people talk about the work you have to do (mentally) to be happy with your body.

‘The beauty standards we are held to change all the time, which means the ‘ideal’ body shape and size will do too. If you are having surgery just for that reason, I think it can be quite dangerous. Why is it going to make you happier?’

‘If you are having surgery to make yourself feel good mentally, it’s not going to work.’ 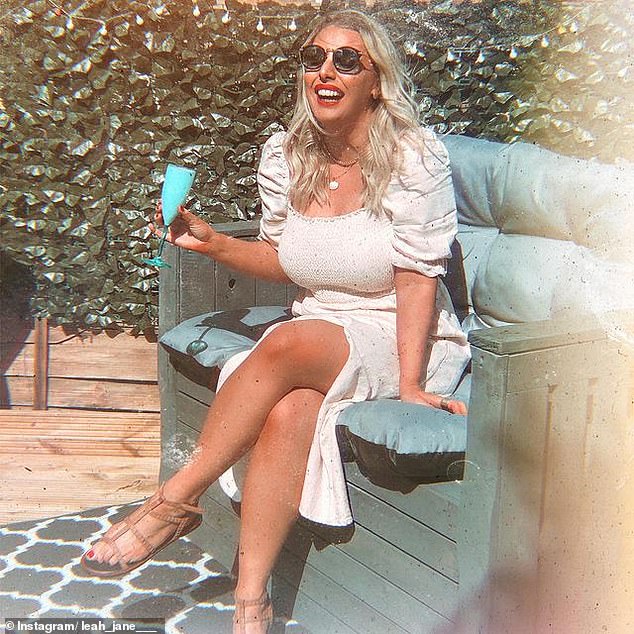 Leah, who is now a size 14 to 16, said not enough people talk about the mental work necessary for becoming happy with your body 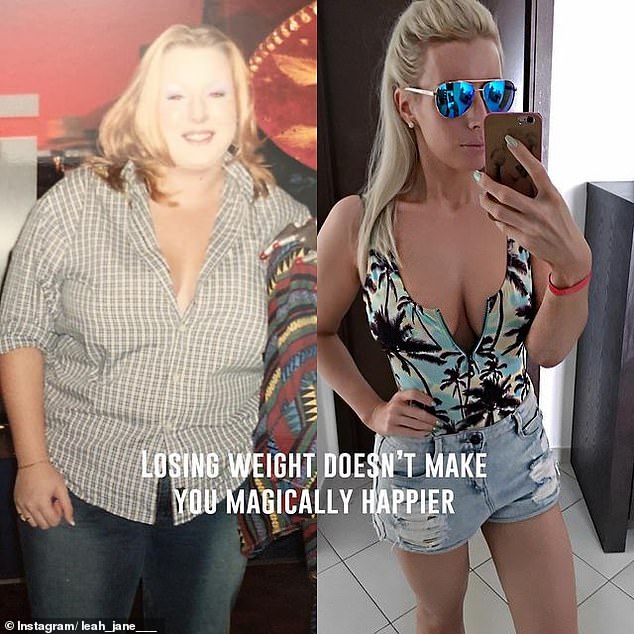 Leah said she was large throughout her childhood and was left with an ‘extreme’ amount of loose skin after dieting to lose weight. Pictured left: At size 24, right: At size 10

Leah claims she was large throughout her childhood and began dieting to lose weight at age 18.

She said being left with an ‘extreme amount of loose skin’ didn’t help her body confidence and admits to feeling insecure despite having spent a large sum on cosmetic surgery to tighten her skin.

The 39-year-old, who has become a size 14 to 16 over the past 18 months, said therapy and following body confidence accounts on social media have helped to change her mindset.

Leah has racked up almost 15,000 views on a TikTok video talking about the difficulty she had with accepting her body. 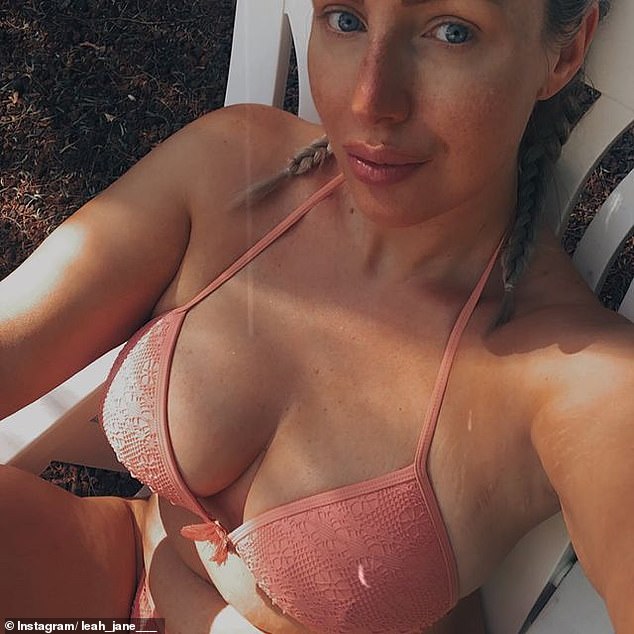 ‘Don’t get me wrong, I was so pleased with what they did and they removed so much skin. It was a flat stomach.

‘I was happy with it but I still hated my body. I couldn’t workout why.

‘Not enough people talk about the work that you have to put in up here to be happy with your body. It’s not all about dieting, plastic surgery.

‘You have to do the work up here for you to be happy with yourself.

‘After my tummy tuck, I had many other surgeries. I got very skinny, developed an eating disorder body dysmorphia.

‘I had lost all this weight, I had all this surgery and I absolutely detested myself and how I looked.

‘Every single day I hated myself and I wanted to change how I looked. I can completely understand when people message me and say ‘look I’ve had that surgery you’ve had and I still hate my body.’ 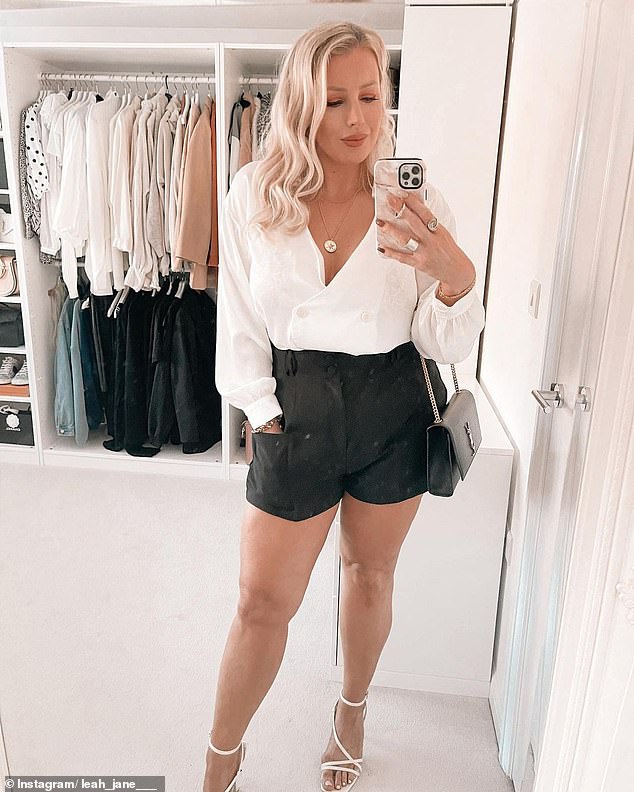 ‘You can change that. I’m happier with my body now than I have ever been and I’m the biggest I’ve been in a very long time.’

Many commenters have praised Leah for sharing her experience, while revealing they’ve had similar experiences.

‘I could have written this. Had a band, lost 8.5st had TT. Hated my body had band emptied gained 3st feel so much better at a 16,’ another said.

A third added: ‘Wow couldn’t agree more I’m 47 menopausal now on HTT had a tummy tuck but understand I need to do work on myself.’

A stream of commenters have claimed they can relate to Leah’s experience, having continued to dislike their own bodies after surgery

What We Included On Our Baby Registry

Using What You Have: 5-Minute Artisan Bread