When it comes to her movie fashion, the actress does not shy away from creating trends that last decades. Case in point: the purple sari from Hum Aapke Hai Kaun that cost a whopping 1.5 million and featured a backless blouse. The backless blouse became an overnight trend and a must-have in every fashion enthusiast’s wardrobe. Similarly, the actress has created a sensation with her wardrobe in movies. Some of these notable movies include Devdas, Kalank, Aaja Nachle, Tezaab, Dedh Ishqiya, Dil Toh Pagal Hai among others.

As Madhuri turns a year older, we take a trip down memory lane to revisit some of her biggest fashion moments in movies. 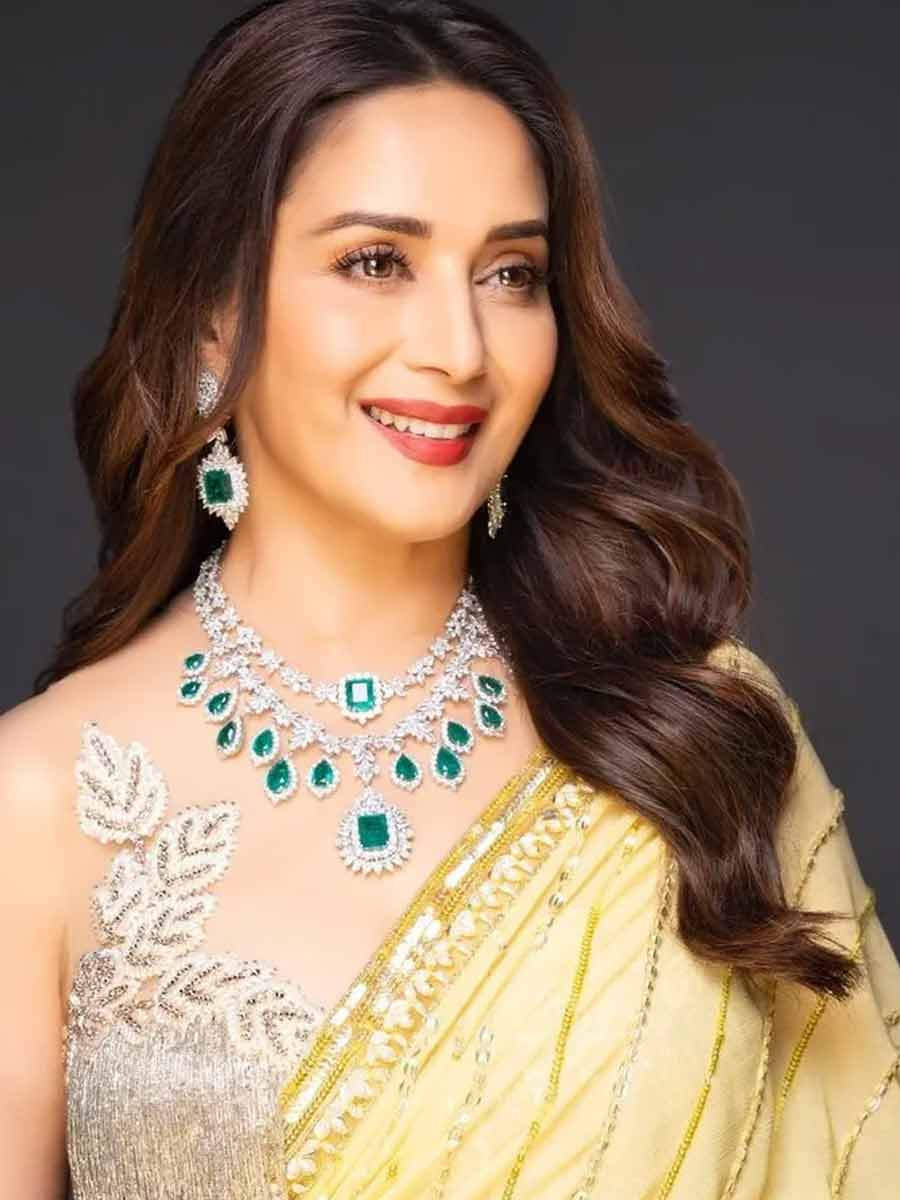 Madhuri Dixit Stole Our Hearts In These Outfits Devdas

The extensive list of Madhuri Dixit’s costumes in the movie Devdas was designed by Abu Jani and Sandeep Khosla and was approximately priced at Rs. 15 lakhs each. These iconic outfits went down in the history of Bollywood movie costumes.

Madhuri was seen in an iconic ghagra set created for a sequence in the film. The meticulous design featured mirror embellishments in Zardozi and was created by a team of highly skilled artisans. It weighed 10 kgs and was created in a period of two months. The ghagra was featured in 2015 at ‘The Fabrics of India’ exhibit held at the Victoria & Albert Museum in London.

Her character Chandramukhi was also seen gracing the mehfil in an extravagant green Anarkali. She embodied glamour in this outfit for the popular song Maar Daala from cult-hit Devdas. This movie also created the trend of taking a heavy dupatta over the head and adorning oneself with statement opulent jewellery pieces.

She also donned a 30 kg lehenga for the song, ‘Kaahe Chhed Mohe’ which was maroon with intricate gold embroidery and a maroon dupatta. She completed the look with rani haar, heavy earrings, and bangles. The attire was designed using gold and jadau. 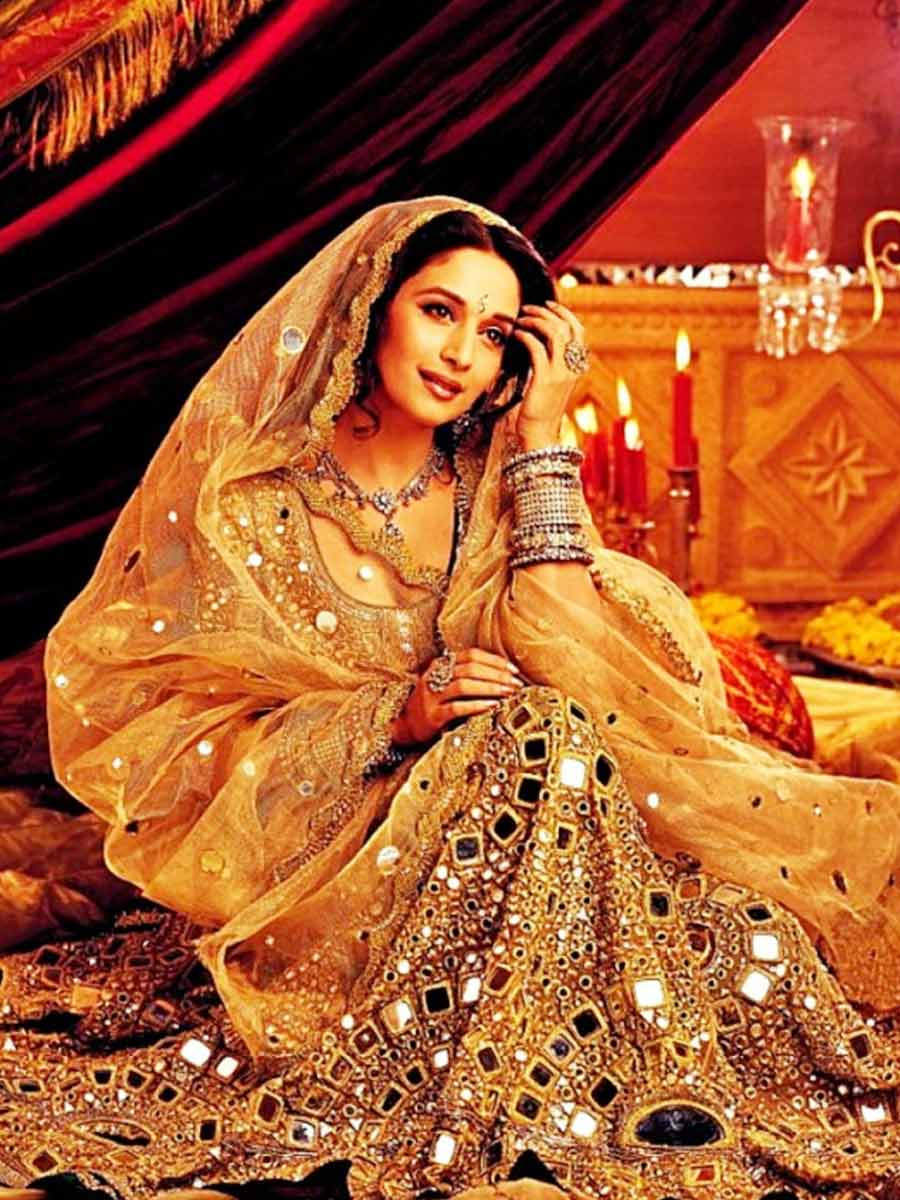 Kalank was ace designer Manish Malhotra’s first foray into costumes for a period film. Madhuri Dixit Nene plays the role of Bahaar Begum in this movie. The designer has used chikankari, mul mul, cotton, vegetable dyes as well as Kashmiri thread work reminiscent of Persia. The jewellery has been carefully curated to reflect the era, it uses Polki, Jadau, Bikaneri Meena, and Kundan with pearl carvings.

In the song Ghar More Pardesiya, Madhuri Dixit is seen wearing a gold rani-haar, heavy chandbalis, and a maangtika. She wears a pink heavily embroidered Anarkali paired with an ocean blue dupatta.

Tabah Ho Gaye is another song that showcases Madhuri Dixit performing her signature steps. She is seen dressed in a vibrant orange embellished Anarkali. She is adorned with gold bangles and a hath phool ending in a ring. 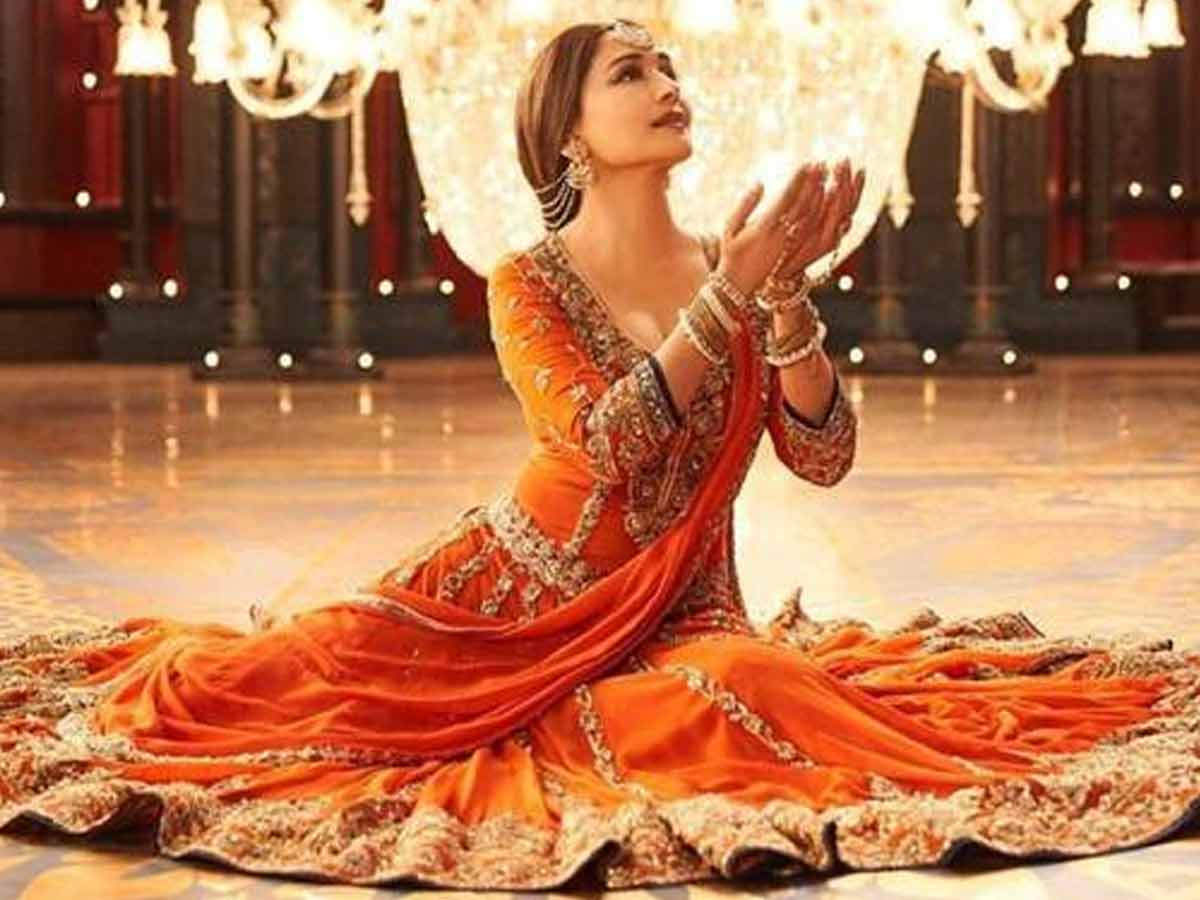 Madhuri Dixit’s Ahead Of The Time Fashion In Hum Aapke Hain Koun..!

Hum Aapke Hain Koun..! a classic movie from the ‘90s had revolutionised the staple wardrobe of a fashion enthusiast. In this movie, Madhuri Dixit’s closet has something for everyone, from comfort casuals to extravagant traditional wear.

One of her popular looks from the movie is the purple saree with embellishments designed by the ace Bollywood designer Anna Singh. This outfit was one of the most expensive costumes in the movie and allegedly cost a whopping Rs. 1.5 million. The backless blouse adorned by Madhuri became the talk of the town in those days.  This outfit moved away from the generic reds, yellows, and greens which were worn to a godh-bharai ceremony. She also wore a maangtika, chunky earrings, and a heavy necklace to accessorise her look.

Another iconic look was from the song Yeh Mausam Ka Jaadu Hai Mitwa. In the song, Madhuri was seen sporting curls which quickly became an overnight trend. She wore a red lace dress and danced in the sunflower fields and looked like a modern diva. 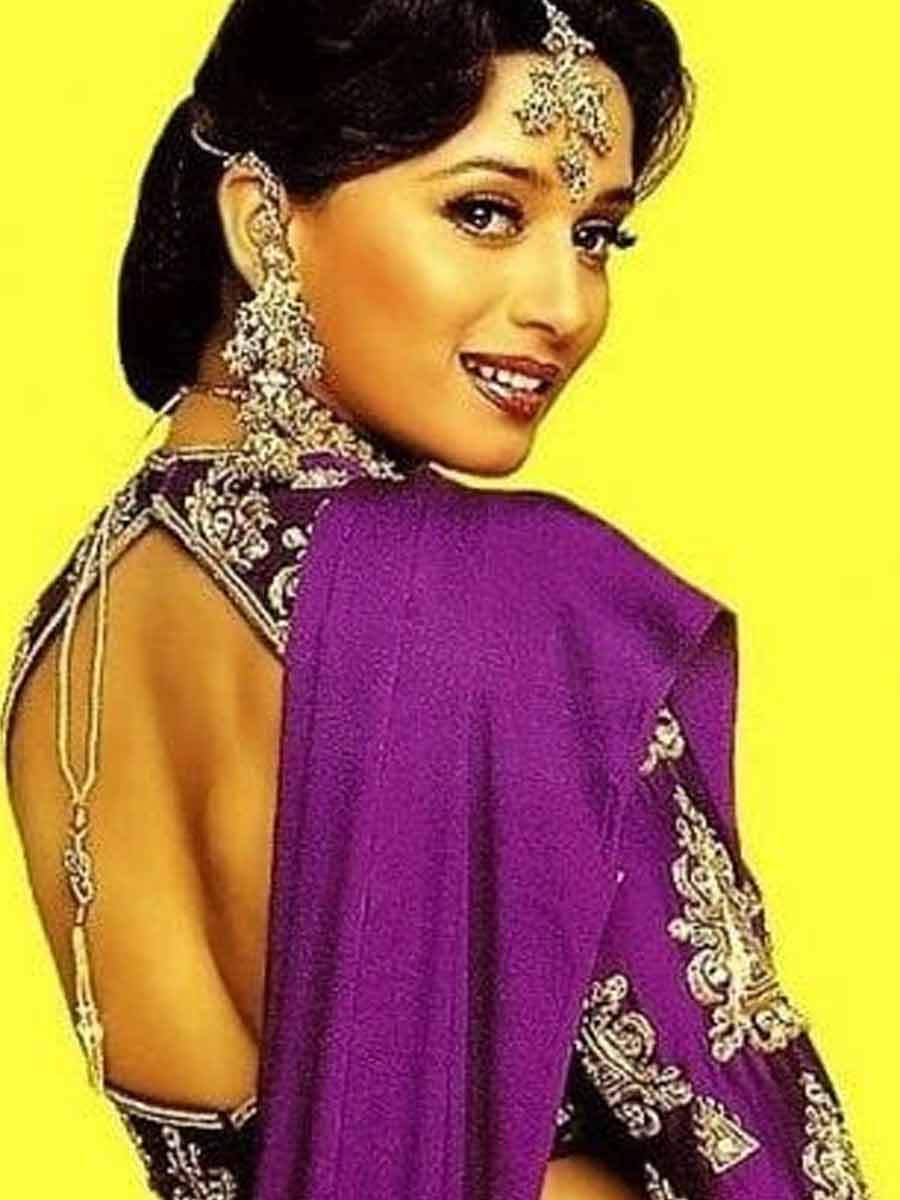 Madhuri Dixit made her debut in the digital space with her pivotal role in The Fame Game. She was seen in an array of the most gorgeous outfits not just in the series but also during the promotional activities. Designers Anamika Khanna and Samidha Wangnoo created the sartorial outfits for the movie.

While designer Anamika Khanna worked on creating the flamboyant and glamorous looks that Madhuri Dixit dons, Wangnoo designed the subtle more demure outfits that Madhuri Dixit wears at home. Her outfits had a predominantly red theme. Designer Samidha Wangnoo said, “Even when her clothes are not red, we used it as the shade for her lipstick, or on her nails.” Since Madhuri’s personal style is more inclined towards traditional wear, they picked traditional silhouettes, colours, and embroidery while designing the pieces.

Madhuri Dixit made a statement in her regal look dressed in an embroidered Anamika Khanna outfit. The indo-western dress had a touch of Indian prints and embroidery. The ensemble features a bustier style blouse, and a draped skirt paired with a long full-sleeved jacket.

She also picked another three-piece set by Anamika Khanna. The multi-coloured ensemble featured a red skirt with pleats, an embroidered waistband matching her crop top, and a long jacket that featured floral motifs and multi-colour craftwork. The highly detailed costuming of Dixit in the series also features a red and teal handloom mulmul saree. 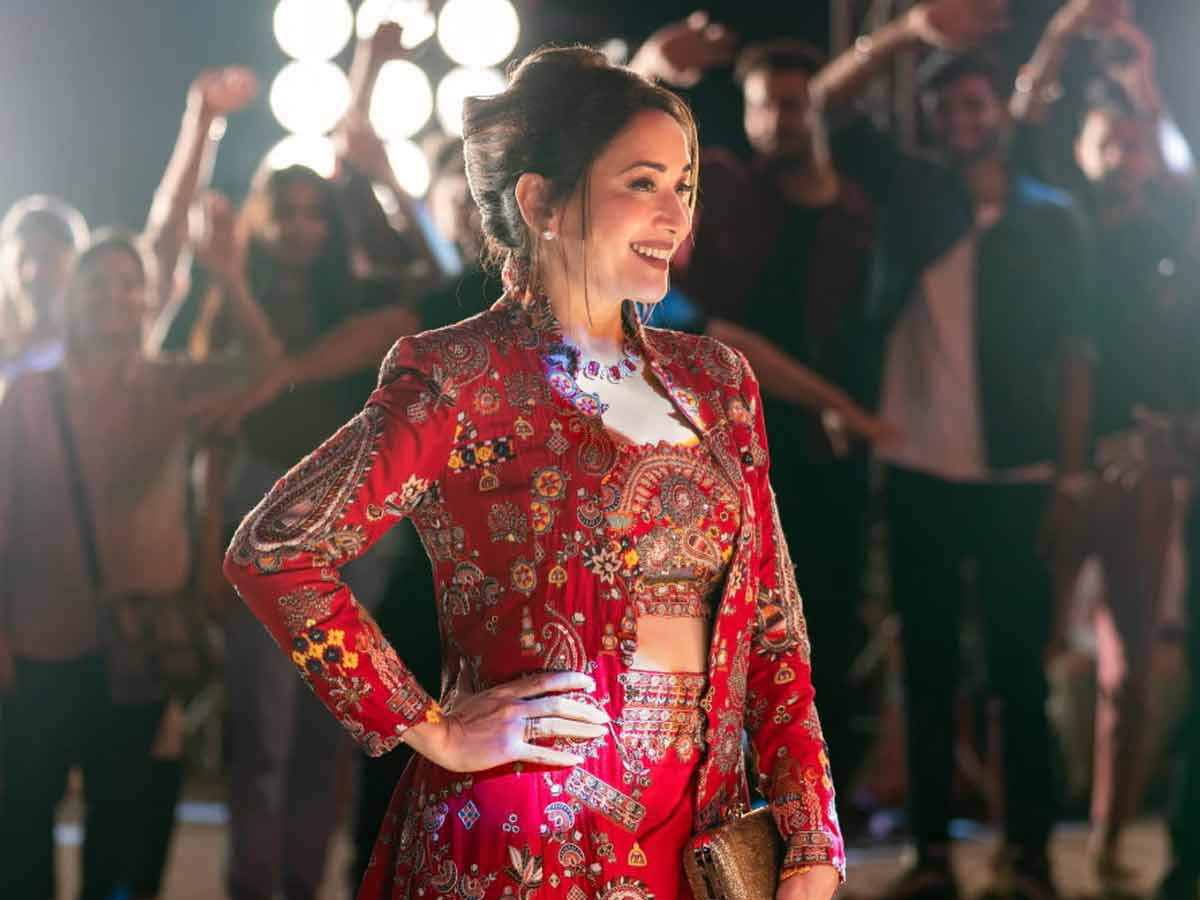 Madhuri Dixit In Her Resplendent Wardrobe From Dedh Ishqiyaa

Dedh Ishqiyaa marked the comeback of Madhuri Dixit in Bollywood at the age of 46. Payal Saluja, the costume designer of the movie, brainstormed for months to put together costumes that did justice to Madhuri Dixit in her role of Begum Para. In this movie, Madhuri is seen donning a nawabi look that was brought out well through her costumes. The styling of the movie was crucial to maintain the authenticity of the atmosphere and the representation of characters. Therefore it was immersed in royal styles from the Nawabi culture and the Mughal era.

In this movie, Madhuri Dixit wears an array of traditional looks from anarkalis, ghararas, and jhumars. Saluja also picked the richest brocades and heavy jewellery for the movie.

Some of the most iconic looks from the movie include a pale pink Chikan saree she donned. Madhuri is also seen in a champagne and gold coloured Anarkali paired with a navratan haar which she wore during the dance sequence of Jagaave Saari Raina.

For the song Hamari Atariya Pe, she looked regal in a black Chikankari kameez paired with a Banarasi brocade lehenga. She is also seen throughout the movie in heavy brocade fabrics in a plethora of greens, reds, and golds. 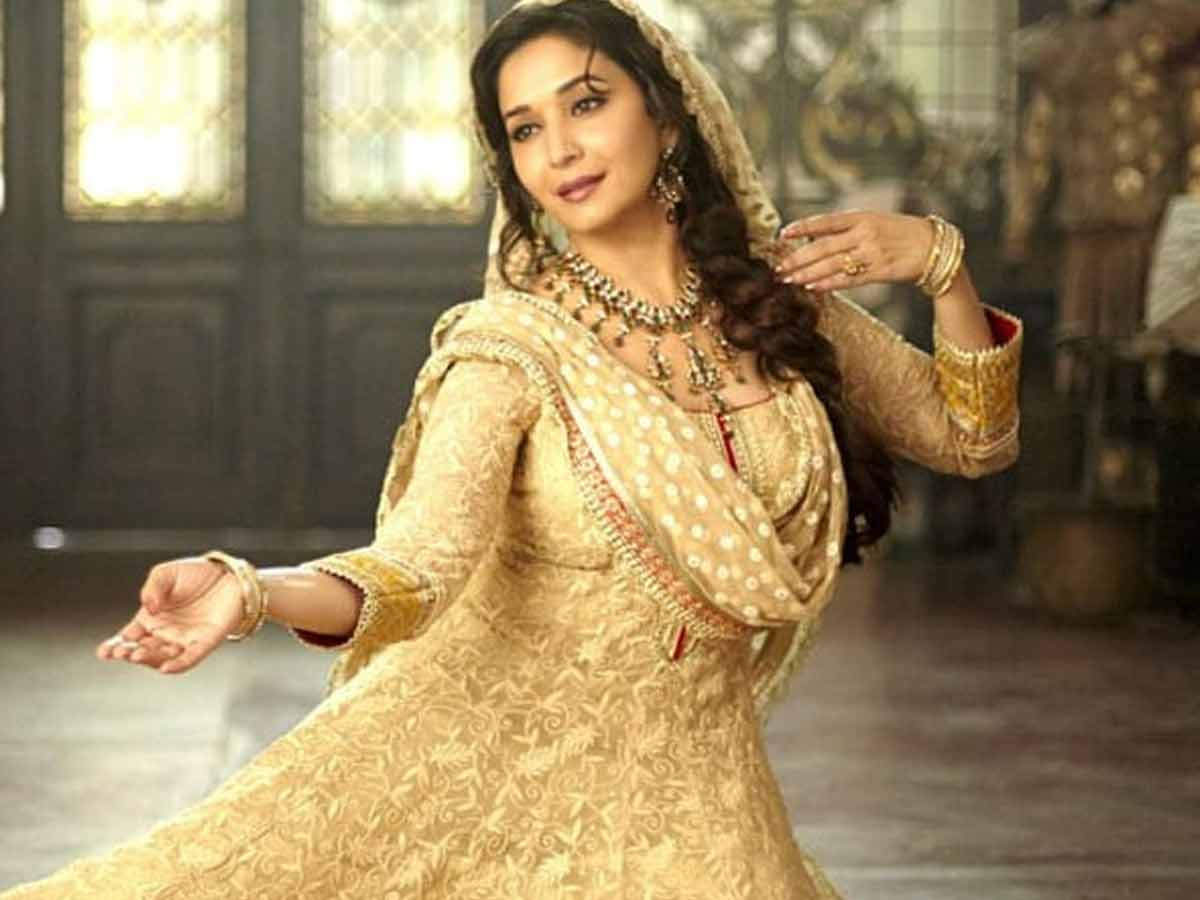 The seniors have spoken: Here’s what to wear to Green Key

Thu May 19 , 2022
After years without the event, students must defer to the ’22s on style, fashion and expectations. by Alexandra Surprenant | 5/17/22 2:00am Related Posts:Anushka Sharma’s guide to chic-casual fashion With tulips blooming along Occom Pond and masses of students flocking to the river, a long-awaited spring has officially arrived in […]